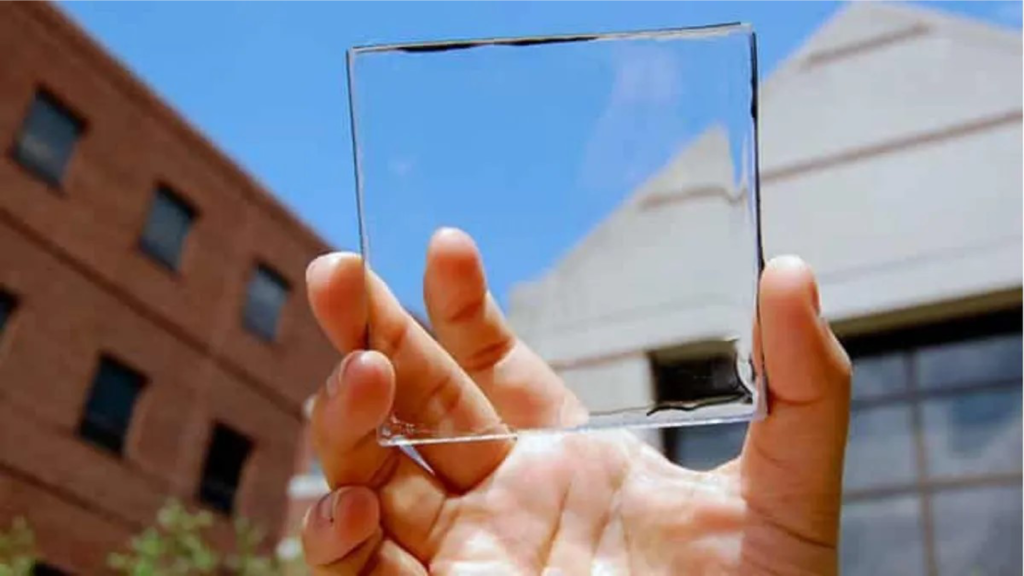 Transparent but still producing energy. Source: Michigan State University - Transparent solar panels have been installed at multiple test locations. - These panels aren't as efficient as conventional panels but can be used in place of traditional windows. - They are coming as early as 2023 to a window near you. Transparent solar windows would be an excellent addition to any home or office space as we strive to shift our energy usage to more renewable sources. Not only can such windows be retrofitted into old infrastructure and help save money on energy costs, but they can also save space in modern buildings that would otherwise be utilized for solar panels. Solar windows have been installed at various places in the world. But the real question with these is, when will they be available for installation in a window near you? In August, IE reported how a commercial building in Australia installed a solar facade that could do the job of solar panels without taking up the rooftop space. Annika Döring, a spokesperson for the facade manufacturer, Avancis, told Interesting Engineering in a recent email that the energy conversion efficiency of its modules varies in the range of 11-13 percent, depending on the opacity of the windows. The lighter the window, the lesser its energy conversion efficiency. Extrapolating this, one realizes that transparent windows are likely to be the least efficient. To better understand the challenges in making transparent solar windows a reality, IE spoke to two companies involved in making them and the progress they have made so far. UbiQD is a Los Alamos-based advanced materials company that harnesses the power of the sun through quantum-dot technology for a variety of applications ranging from agriculture to security. Its Wendow translucent solar technology is meant to gather electricity from what appear to be conventional windows. Redwood City-based Ubiquitous Energy (UE) has ambitious plans to help solve the climate crisis by using its transparent solar energy technology on every possible surface. Founded by scientists at MIT, its UE Power transparent solar panels harvest energy from infrared and ultraviolet light while allowing visible light to pass through, making it possible to "invisibly generate electricity." Technology that makes solar windows work UbiQD's Wendow is made by sandwiching a layer of its quantum dot technology between two layers of glass. The quantum dots absorb sunlight and internally reflect the infrared light to the edges, where solar cells generate electricity. 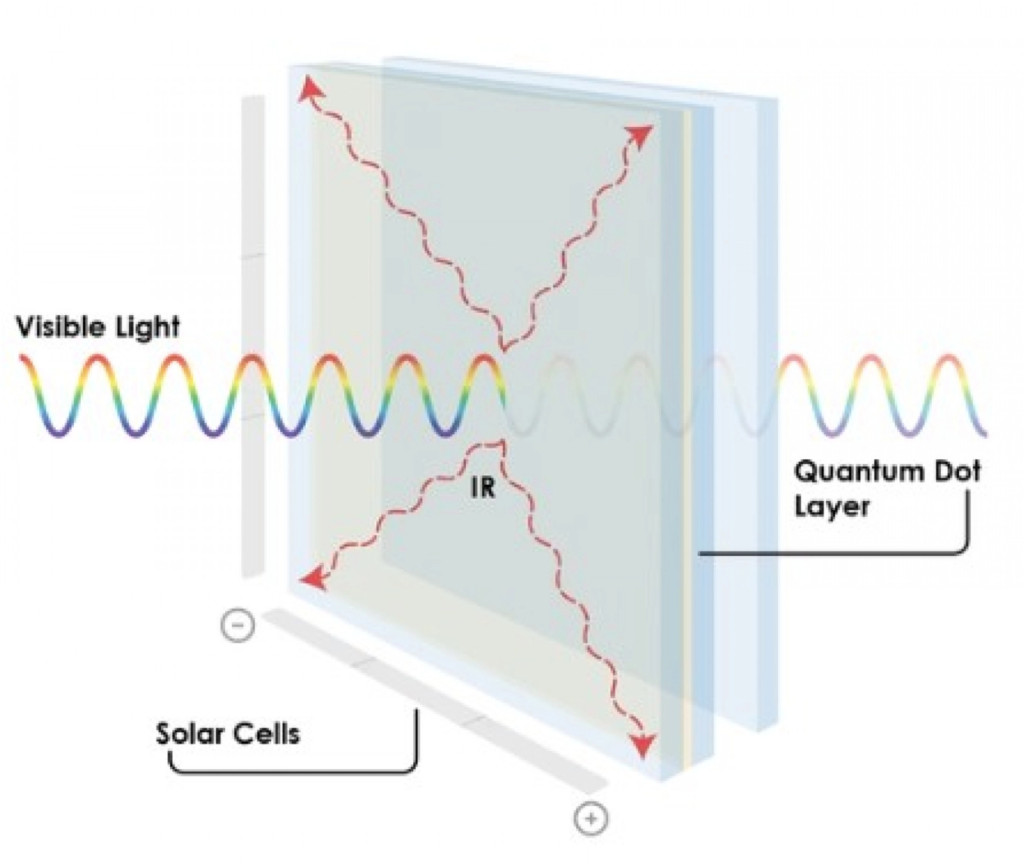 Wendow by UbiQD. Source: Wendow Ubiquitous Energy's UE Power contains a transparent solar coating made from light-absorbing dyes that tap into both infrared and ultraviolet spectra of light while letting visible light pass through. The company also claims that the dyes are non-toxic and are made from materials that are abundant on earth, and are similar to pigments used on fabrics. 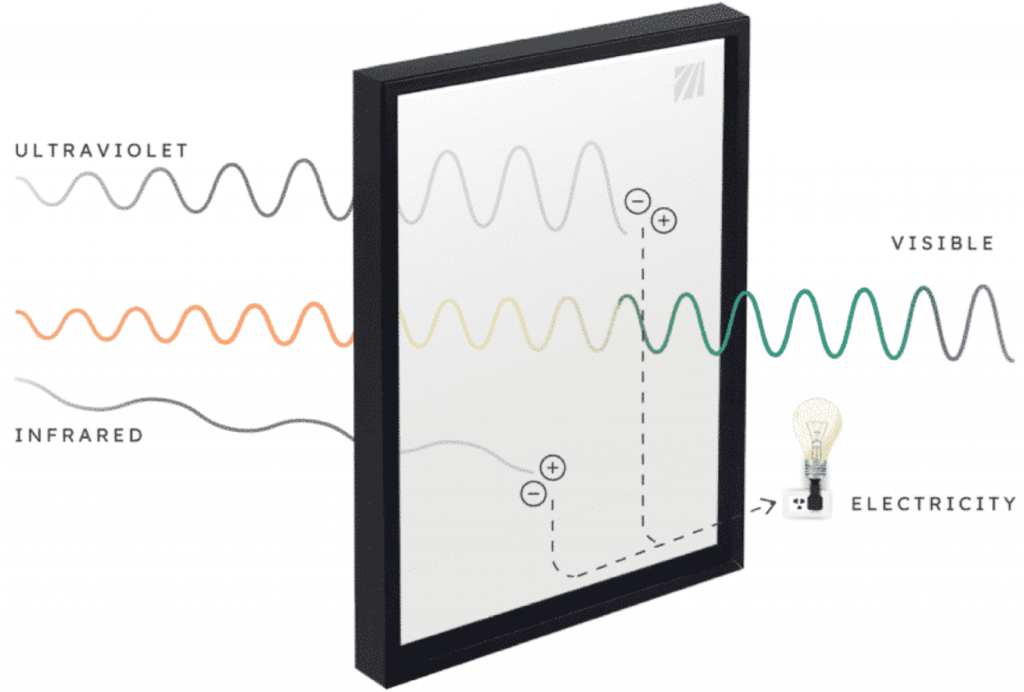 UE Power's transparent window. Source: Ubiquitous Energy The energy production efficiency Unlike a solar photovoltaic cell, where a large amount of incident energy is tasked to generate power, transparent solar windows have relatively low energy conversion efficiency. UbiQD's CEO Hunter McDaniel told IE, "Our best efficiencies are around 5 percent, at about 50 percent transparency. That equates to 50 Watts per square meter of an area in direct sunlight." For the windows to be used at commercial installations, they also need to meet the local building code regulations. Veeral Hardev, VP of Strategy at UE Power, claimed that its solar windows "match the transparency performance of most commercial windows today (40 to 70 percent) and have solar factor/solar heat gain coefficient as low as 0.25." An average 3 ft X 5 ft (1.39 sq. m) window enabled with its technology can produce 200 watt-hours of electricity per day. In comparison, traditional solar panels available in the market today can convert up to 22 percent of the incident energy. However, Döring, whose business Avancis manufactures partially transparent windows, stated that the "comparison is somewhat not fair, as "conventional" solar panels are tailored for energy and yield optimized, and its modules for facades are aesthetically and architecturally designed." The early adopters of transparent solar windows Transparent solar windows are not only generating news as demonstration projects—many have already been set up. On the list of installations for UE Power are its own offices in Redwood City, California, at the R&D facility of its partner in Northwood, Ohio, a commercial office building in Boulder, Colorado, and in Tokyo, Japan. In addition, it has an installation at Michigan State University.

Wendow being installed at a hotel in New Mexico. Source: Wendow UbiQD also claims to have installations in multiple U.S. states, which include a Holiday Inn hotel, its own headquarters in Los Alamos, and the Department of Energy's National Renewable Energy Laboratory (NREL) in Golden, Colorado. What's the premium for transparency? UbiQD's product isn't commercially available yet, but McDaniel expects the premium for transparent solar power to be not more than 30 percent over ordinary windows. He said that "Traditional solar cells are not sold at a cost per watt, not based on area, like windows. The additional window cost, per watt, is similar to utility scale solar. We have a similar payback time to traditional solar [before incentives]." UE is also confident that its transparent solar windows will be competitive with rooftop solar when installed costs per watt are compared. The company, however, wants to be competitive with the cost of conventional windows and expects to add only a marginal component cost to them. "We do not have expected end-product cost information available at this time as we will be selling our technology directly to window manufacturers," Hardev told IE. Anderson Corporation, a premier window brand in the U.S., is UE's partner in this venture. 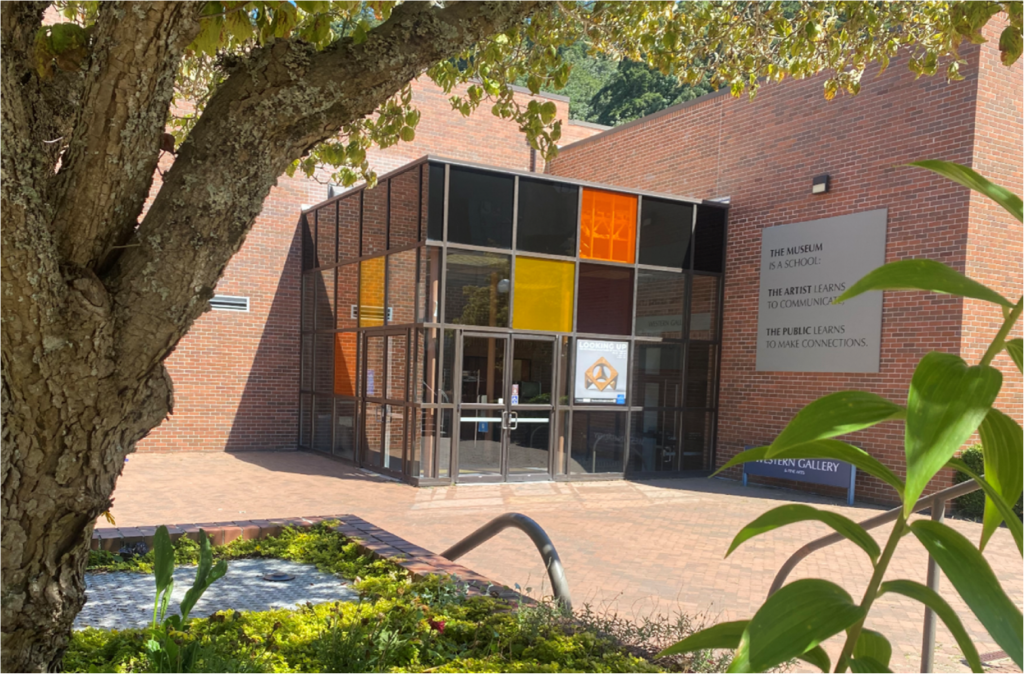 UbiQD's installation at Western University with orange, yellow, and transparent windows. Source: UbiQD Going commercial soon UE Power windows as large as 5ft x 10ft are expected to be available commercially starting in 2025. The windows will be manufactured at a high-volume production line in the U.S. and will cater to both residential and commercial window markets. UbiQD, on the other hand, expects its commercial product to be rolled out in 2023. McDaniel attributed the big and heavy construction materials and complex supply chains to the high costs of its windows. "It is challenging to get costs down and performance high enough, to make solar windows economically viable. Energy is very inexpensive, and we often take for granted that 1,000 Watts for an entire hour only costs 10-30 cents. Producing this much energy is not easy, but the value created is small." Read the original article here.
Back to top