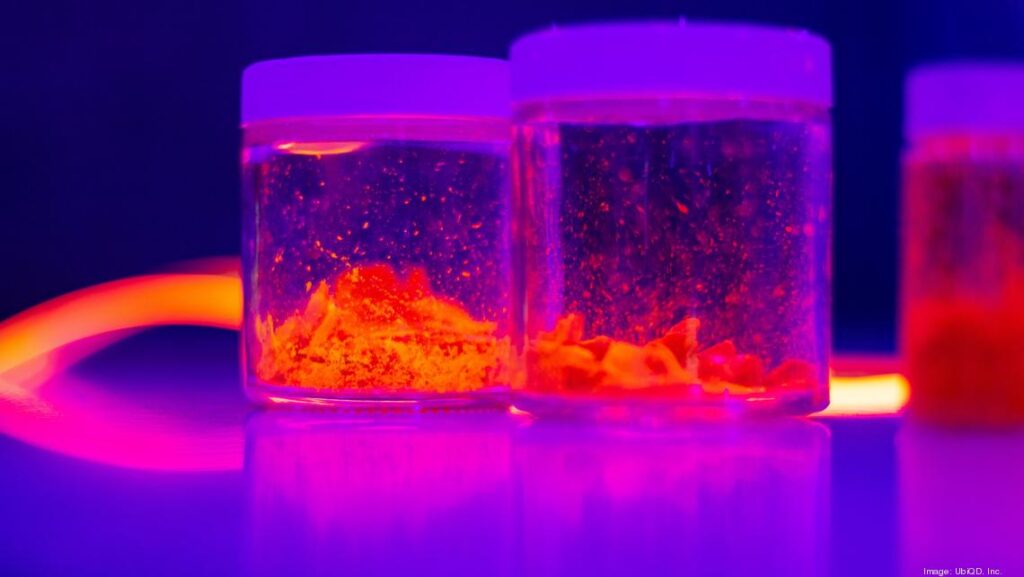 Quantum dots, seen in the jars here, glow under ultraviolet light, displaying their photo-luminescent properties The newest phase of a half-decade-long partnership will move Los Alamos-based UbiQD Inc. toward its namesake goal — making quantum dots ubiquitous in security technology. SICPA SA, a technology company based in Switzerland, announced Monday that it would expand its partnership with UbiQD to commercialize more quantum dot products in anti-counterfeit security inks. Quantum dots are a type of semiconductor nanoparticle technology that absorb one color of light and then convert it into a different color. "The name of the company, UbiQD, is short for ubiquitous quantum dots," Hunter McDaniel, UbiQD's founder and CEO, said. SICPA's customers use security inks on high-value items like passports or bank notes. The Swiss company first contacted UbiQD in 2016 to work on developing quantum dots for commercialization in its security ink products. Fast forward to the present, and UbiQD has agreed to provide large supplies of its quantum dots to SICPA through an exclusive supply and licensing agreement. McDaniel founded UbiQD in 2014 and the company raised $7 million for its quantum dot technology in 2020. It employs 25 people full-time at its Los Alamos facility and focuses on using quantum dots in greenhouse roofs and windows. Developing dots for use in security inks is a smaller but growing part of UbiQD's business, McDaniel said. Commercializing quantum dots is usually limited because they can be toxic and expensive to make. UbiQD, according to McDaniel, developed a way to manufacture the dots more safely and at a lower cost. "The idea is that quantum dots are going to be ubiquitous now," said McDaniel, who was a Business First 40 Under 40 honoree this year. Hunter McDaniel founded UbiQD in 2014. "This is a really exciting opportunity for us to actually deploy quantum dots at a large scale." Supplying quantum dots for use in security inks on high-value items is set to bring UbiQD over $1 million in revenue this year, McDaniel said — more than a quarter of the company's projected 2022 revenue of $3.5 million. UbiQD's total estimated 2022 revenue is up significantly from its 2021 revenue, which McDaniel said was around $2.5 million. UbiQD's expanded partnership with SICPA will drive this revenue growth, McDaniel said. While SICPA and UbiQD's partnership was at first "narrowly defined," McDaniel said, UbiQD will now supply large amounts of quantum dots to SICPA for a wider range of purposes, broadening the scope of the partnership into areas like supply chain integrity, sensitive document security or counterfeit pharmaceuticals deterrence. "Counterfeiting is ubiquitous and there's all sorts of efforts to prevent it," McDaniel said. "This is a really exciting opportunity for us to actually deploy quantum dots at a large scale." SICPA has partnered with governments, central banks and high-security printers as customers of its security ink products. Headquartered in Switzerland, it also has a U.S. subsidiary, SICPA US, which has a subsidiary based in Albuquerque, STA Technologies, located at 5401 Venice Ave. SICPA has around 3,000 employees. Read the original article here.
Back to top